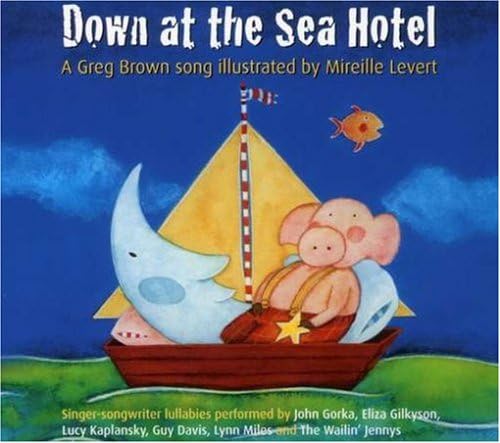 "p"The CD also contains a 40-page printable file with a dream song by two-time Grammy nominee GREG BROWN which reads like a bedtime story illustrated by Governor GeneralAward-winner MIREILLE LEVERT "h3"Amazon.ca "p"Producers of kids music have run every scheme imaginable to make their projects seem pleasing across the generations. Grown-up songs have been stewed in kiddie sensibilities in the name of rendering family music palatable, and sophisticated names have been dragged through the sandbox. So when a new CD of lullabies boasting a slate of A-list artists works its way toward nightstands, getting excited about getting drowsy is no longer the automatic response. Sometimes, though, it should be. This CD companion to a beautifully illustrated bedtime book of the same name will send alt-country and indie-minded adults to a gentle Shangri-la of the mind, while floating the five-and-under set off to a long spell under the sandman's supervision. Credit the singers, especially the always reliable Lucy Kaplansky and John Gorka, with concocting a restful vibe that reaches beyond the simply mellow to someplace heartfelt, and credit the songwriters with doing what each of them is known for: making the heart and mind move a little closer together. Standouts include Neil Young's evocative "Barefoot Floors," sung by the Wailin' Jennys, Steve Earle's "Nothing But a Child," sung by all this project's performers, and Tom Waits's robust, sober, and sincerity-drenched "Midnight Lullaby," sung by Guy Davis. --Tammy La Gorce